Saved Searches Advanced Search
COVID-19 Safety at ORL: We are open for browsing and borrowing. View our guidelines for safely visiting your library.
Print 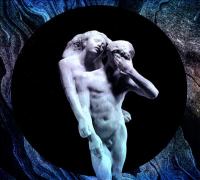 Loose and sonically diverse, Reflektor is heavily influenced by Régine Chassagne’s Haitian roots. Along with the more pronounced Caribbean inspiration, LCD Soundsystem’s James Murphy produces and pushes AF’s sound to new places while paying homage to their rock and roll predecessors. It’s overlong, but most double albums are.

While this album's content doesn't quite seem to match its sprawling ambition, it's still a thoughtful, often moving - and always very dance-able - meditation on love in a "reflective age".

Seventy minutes of wide-screen dance rock co-produced by LCD Soundsystem retiree James Murphy, the Grammy-grabbing, high-aiming, arena-filling, indie-earnest family band does what the Clash, Talking Heads and so many before it have done: reconnect rock to its dance-floor soul. There are flashes of glam, punk, disco, electro, dub reggae and Haitian rara. Being Arcade Fire, there's also emo dramatics and cultural critiques (staring at screens: don't do it!). Of course, the haters hated; the chin-scratchers debated the politics of the album's Caribbean undercurrents. But that ability to provoke actual feelings is what makes this great. And no release this year had a more entertaining rollout brouhaha. Stephen Colbert called them pretentious to their faces; they laughed too. And then the party started.

There are no age suitabilities for this title yet.

There are no notices for this title yet.

There are no quotes for this title yet.

Find it at ORL